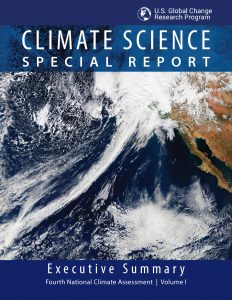 The cover of the Climate Science Special Report PDF.

On November 3, 2017, the U.S. Global Change Research Program (USGCRP) released The Climate Science Special Report (CSSR), a detailed assessment of our current understanding of the Earth’s climate system, with a primary focus on the United States. The report is available in both HTML and PDF format at https://science2017.globalchange.gov.

The Climate Science Special Report serves as Volume I of the federally mandated Fourth National Climate Assessment (NCA4) and is intended to provide the authors of the forthcoming Volume II of NCA4 with a comprehensive, up to date scientific foundation for assessing the impacts and risks associated with climate change.

Working as part of NOAA’s Assessments Technical Support Unit (TSU), scientists and other experts from CICS-NC played key roles in the development and production of the CSSR:

In addition to working on the CSSR, the TSU team has been busy helping develop drafts of NCA4 Volume II: Climate Change Impacts, Risks, and Adaptation in the United States. In conjunction with the release of the CSSR, a draft of NCA4 Volume II was made available for public comment and peer review by the National Academies of Science. The team will be hard at work throughout 2018 finalizing NCA4, with an expected release in December 2018.