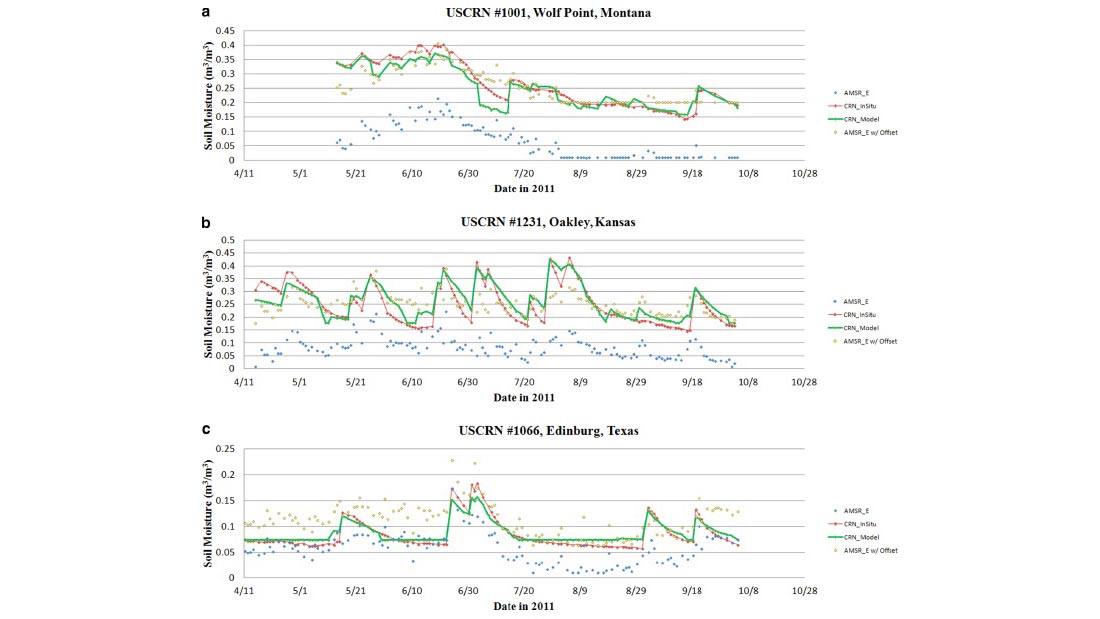 (a) (top), (b) (middle), and (c) (bottom): comparisons of USCRN in situ data, USCRN modeled estimates, Raw AMSR-E data, and AMSR-E data after the introduction of an optimal, linear offset. (For interpretation of the references to color in this figure, the reader is referred to the web version of this article).

Building on previous work by the same author team, a paper in Advances in Water Resources reports on the use of satellite data to validate a model for generating soil moisture estimates using precipitation data from NOAA’s U.S. Climate Reference Network (USCRN). Both the model estimates and the USCRN measurements of soil moisture compare well with the selected satellite record, suggesting that the model can provide useful soil moisture information for locations and time periods where satellite data is unavailable.

USCRN soil moisture data is only available back to 2009 or 2010 depending on the station, but the network’s precipitation data dates back to 2002, and even earlier at some locations. An earlier paper described the development of a model that can extend the soil moisture record back in time using precipitation data. The new study uses remotely sensed soil moisture data from the Advanced Microwave Scanning Radiometer–Earth Observing System (AMSR-E) on board the Aqua satellite as a benchmark for evaluating both the performance of the model and the in situ measurements used to validate the model.

Finally, the model is applied retroactively to generate soil moisture estimates for 2002 through 2011—the period for which the AMSR-E data is available. By comparing the data sets, the authors found that the model produced results comparable to, or even better than, the satellite data. This suggests that, with the help of temporarily installed soil moisture sensors to provide location-specific calibrations, the soil moisture model can provide useful historical soil moisture records, and at higher frequencies than those offered by satellite data sets.