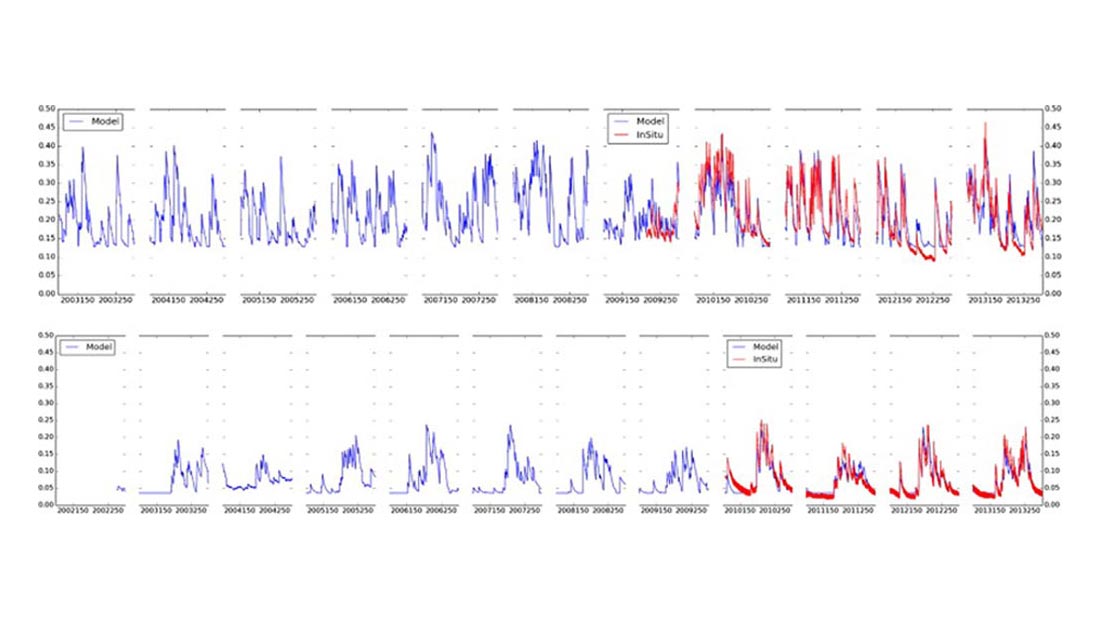 Long-term data on soil moisture can be invaluable for making decisions about agricultural irrigation, understanding and predicting drought, and improving global climate models. Unfortunately, accurate soil moisture measurements are a fairly recent development. Taking advantage of the close link between precipitation and soil moisture, Jesse Bell of the Cooperative Institute for Climate and Satellites–North Carolina and two colleagues from the U.S. Department of Agriculture (USDA) have proposed and tested a mathematical model for generating historical soil moisture data from observed precipitation data. Their method and results are presented in a new paper published in the journal Advances in Water Resources.

Observing networks such as the National Oceanic and Atmospheric Administration’s U.S. Climate Reference Network (USCRN) and the USDA’s Soil Climate Analysis Network (SCAN) now provide widespread, high-quality data on soil moisture and precipitation as well as other parameters. SCAN sites offer precipitation and soil moisture data as far back as 2000, providing a relatively rich source of data for calibrating and testing the soil moisture model. By contrast, USCRN soil moisture observations only date back to 2009, but precipitation data is available from 2002. Also, for many USCRN locations, there are additional decades of precipitation data available for the same site—data which can be used to generate longer-term modeled historical estimates of soil moisture. Comparison of cumulative distribution functions (CDFs) of in situ observations vs. modeled estimates of soil moisture for several USCRN sites.

The first step in this project was to identify a subset of stations for which the soil moisture model could accurate reproduce observed soil moisture data. This was done separately for both SCAN and USCRN networks by calibrating the models at each location and identifying stations for which the model performed sufficiently well over several years. For both the SCAN and USCRN networks, a substantial number of sites were deemed adequate. Next, the models were calibrated using one, two, and three years of data and then validated (tested) against observed data for the following year. For example, for USCRN sites, the longest calibration period used data from 2009 or 2010 through 2012 with the model then tested against observations for 2013.

The authors found that for sites where two or three years of concurrent precipitation and soil moisture observations are available, the model generated historical estimates with root mean square errors (RMSE) of less than 0.033 m3/m3. This suggests that the model performs well enough to extract useful soil moisture estimates using only precipitation data. These estimates can be used to fill in gaps in observed records or to provide historical estimates over periods for which no data is available.