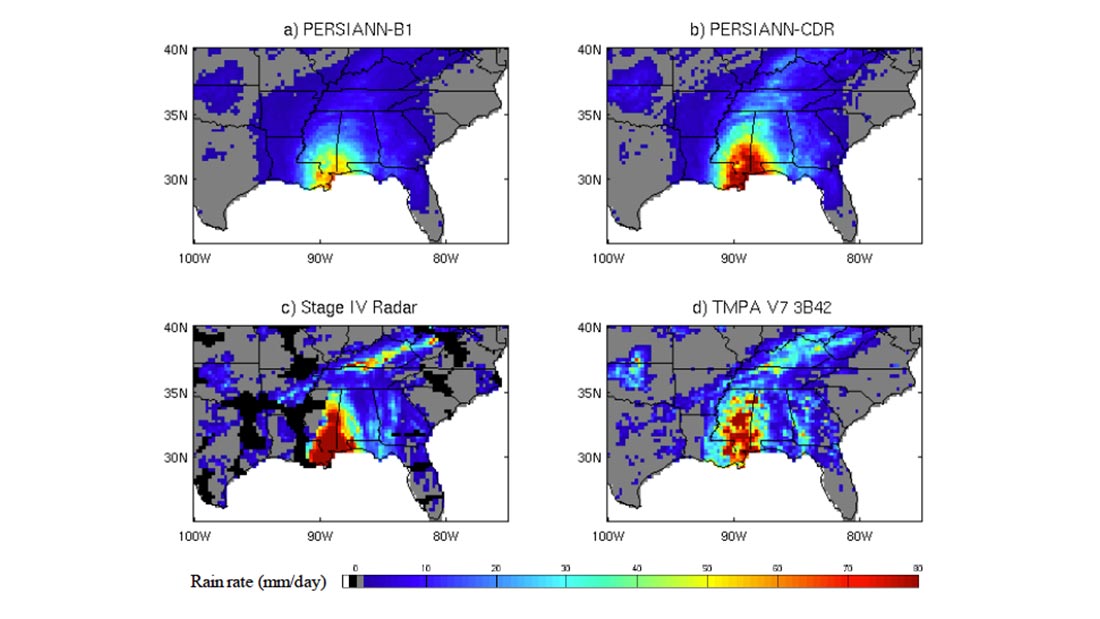 The Center for Hydrometeorology and Remote Sensing (CHRS) at the University of California, Irvine, a partner of CICS-NC, has developed a smartphone/tablet application called “RainMapper” for displaying near-real-time precipitation data. The app is available free of charge for Apple iOS and Android devices.

The data come from a satellite-based rainfall retrieval algorithm known as Precipitation Estimation from Remotely Sensed Information using Artificial Neural Networks, or PERSIANN. The app allows users to view rainfall totals over a range of recent periods, from three hours up to 72 hours, and from around the globe at continental to regional scales.

The same PERSIANN algorithm is also the basis of a new Climate Data Record (CDR) called PERSIANN-CDR. The PERSIANN-CDR was developed by researchers at CHRS and NOAA’s National Centers for Environmental Information (NCEI), with support from Olivier Prat from the Cooperative Institute for Climate and Satellites–North Carolina. It is now one of NCEI’s operational CDRs.

The CDR is described a new paper in the Bulletin of the American Meteorological Society. In addition to documenting the source data and methodology, the paper also presents three case studies comparing PERSIANN-CDR data with and ground- and radar-based precipitation estimates. These studies confirm that PERSIANN-CDR provides useful estimates of precipitation, while also revealing some of the strengths and weakness of each of the methods used to measure precipitation.

Because it includes data for a period of more than 30 years (1983 to delayed present), this high-resolution CDR (featuring daily data at a spatial resolution of 0.25°) should prove valuable for a variety of hydro-climatological applications, including analyzing trends in daily precipitation patterns, drought patterns, and extreme precipitation events, such as two events examined in the paper: Hurricane Katrina in 2005 and the historic 1986 rainfall and flooding event in Sydney, Australia.

More information on this and other CDRs is available at on NCEI’s web site at: http://www.ncei.noaa.gov/cdr/operationalcdrs.html