Researchers from CICS-NC and the University of North Carolina Chapel Hill used satellite data and various statistical models to analyze trends in Arctic sea ice extent. Their findings confirm earlier results showing that the downward trend in Arctic ice cover has accelerated in recent decades. The new research suggests that the Arctic could be virtually ice free in summertime by the 2030s.

Asheville, NC. (February 21, 2018) — In a new paper published in a special issue of Remote Sensing, researchers Ge Peng and Jessica Matthews of North Carolina State University’s Cooperative Institute for Climate and Satellites–NC and Jason Yu of UNC Chapel Hill use satellite data and various statistical models to estimate observed trends in Arctic sea ice extent and extrapolate those trends to project the first occurrence of an ice-free Arctic summer. Although projections vary significantly depending on the model and range of observations used, estimates using data for 1986–2015 suggest that the Arctic could be ice-free in summer as early as 2031.

Satellite observations, which first became available in the late 1970s, show that sea ice cover in the Arctic has been decreasing rapidly, with the annual summer minimum extent declining by approximately 10%–15% per decade. The rate of decrease appears be accelerating and generally exceeds what climate models project. These changes may have profound implications for the Earth’s climate, coastal ecosystems, international trade, and national security. As a result, it is important to understand how quickly the ice cover is changing.

For this study, the authors used data from the NOAA/NSIDC sea ice concentration Climate Data Record, which provides a consistent, long-term data set from passive microwave satellite observations. The data are available on a daily basis beginning in 1979. After confirming that alternative averaging methods had virtually no effect on trend estimates, the authors used five-day moving averages—a common choice for sea ice research—for their analysis..

The team evaluated trends and projections by fitting a linear regression model to various subsets of the data. Over the full 37-year data set, the summer minimum extent is decreasing by 0.87 million square kilometers per decade, with the winter maximum dropping at a slower rate of 0.35 million square kilometers per decade. However, these trend estimates—and the resulting projections—differ significantly depending on the time period used in the regression. For example, a trend calculated using data from only first 20 years of the satellite record, when rate of decline was slower, suggests that Arctic summers would not be ice-free (defined as less than one million square kilometers of ice coverage) until the middle of the the next century. Using more recent data moves the expected ice-free date much earlier: 2048 using the last 30 years of data and 2036 using the most recent 20 years of data, as shown in the figure below. 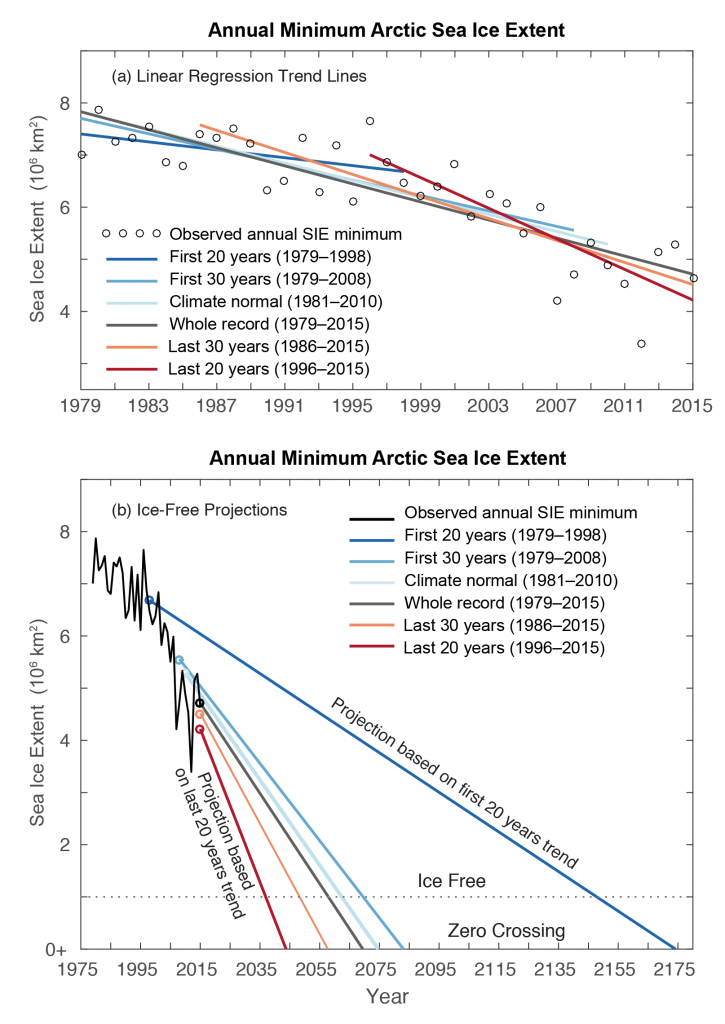 Caption: (a) Observed annual minimum Arctic sea ice extent and linear trend lines estimated using different subsets of data. Trends based on more recent subsets show faster rates of decrease. (b) The same trend lines from (a) extrapolated into the future. The horizontal “Ice Free” line indicates the year of the first occurrence of an ice-free (less than one million square kilometers) Arctic summer. Linear trends computed using more recent data suggest the Arctic could be ice free in summer by mid-century or sooner. Source: Adapted from Peng et al. 2018. 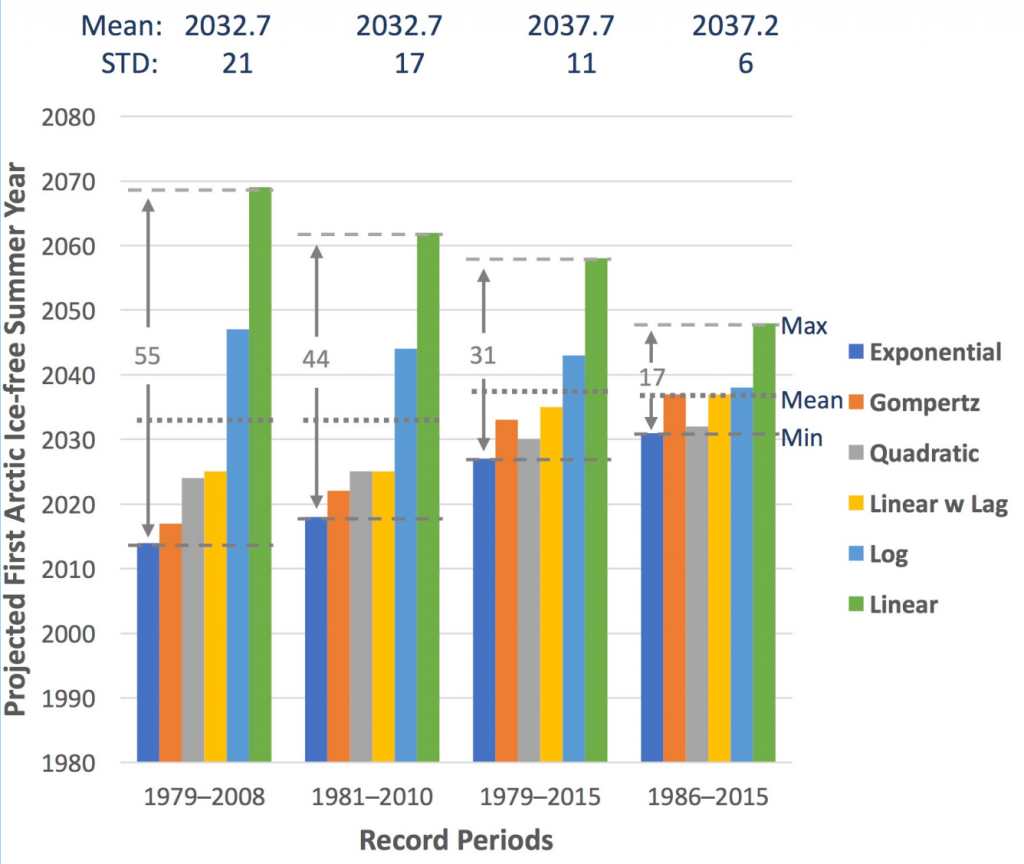 Because the rate of ice-loss appears to be increasing over time, the authors also tested several non-linear models (exponential, Gompartz, log, quadratic, and linear-with-lag), again using various subsets of data. The quality of the resulting fits varied depending on choice of model and data subset, resulting in trade-offs between how well a given model fit the data used for estimation, how well it predicted the other observed values in the data set, and the physical plausibility of its future projections. The best agreement across all six models was achieved by using the last 30 years of data (1986–2015) to estimate the model, and the resulting projections converged on 2037 as the ice free year, plus or minus six years.

As the authors note, these results highlight “the challenge of statistically extrapolating a complex and rapidly changing system,” but the results do reveal that trend estimates are largely unaffected by the choice of averaging method and provide further evidence that the Arctic could be ice-free in summers before the middle of this century.

Future work will examine projections on a regional level and apply a similar analysis to projections from climate models.