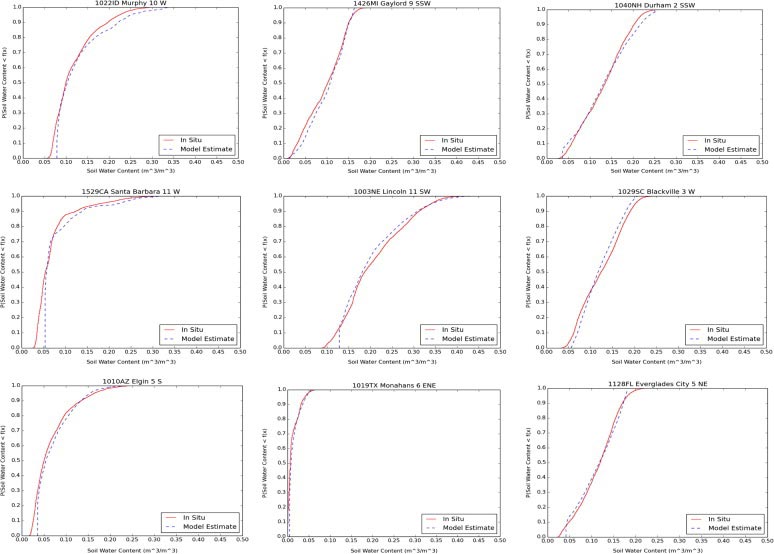 Comparison of cumulative distribution functions (CDFs) of in situ observations vs. modeled estimates of soil moisture for several USCRN sites.

The International Satellite Cloud Climatology Project (ISCCP) collects and analyzes satellite data in order to advance our understanding of clouds—how they are distributed around the planet and how they change from day to day, across seasons, and from year to year. Anand Inamdar of the Cooperative Institute for Climate and Satellites–North Carolina (CICS-NC) and Kenneth Knapp of NOAA’s National Centers for Environmental Information (NCEI) have recently completed a calibration effort that will add a collection of more than 30 years of high-resolution data to the ISCCP effort.

The ISCCP project started in 1982, with data collection beginning in 1983. Due to the sheer volume of data and the computing limitations at that time, the official ISCCP products were limited to data with a resolution of 30 kilometers, known as “B2” data. Higher-resolution “B1” data was collected and preserved, but sat unused for more than twenty years. Recently, NCEI began efforts to rescue this higher-resolution data and make it available for research. The B1 data provides information from all sensor channels from various geostationary satellites at 10-kilometer, three-hour resolutions from 1978 through the present. The improved spatial precision of this data will, literally, give scientists a better picture of more than thirty years of cloud cover.

Before the B1 data can be used, it needs to be properly calibrated. This involves developing and testing the mathematical equations used to convert the raw numerical information recorded by the satellite sensors into accurate, usable data. This calibration process had already been performed for the infrared data channels, and now Inamdar and Knapp have completed the calibration process for visible-light data channels.

The visual-data calibration was performed by cross-calibrating the ISCCP B1 data with Advanced Very High Resolution Radiometer (AVHRR) reflectance data from the Pathfinder Atmospheres Extended (PATMOS-x) data set, which is in turn tied to the calibration of NASA’s Moderate Resolution Imaging Spectroradiometer (MODIS) instrument. Additional validation was performed by evaluating data from images of the moon and certain desert areas on Earth. These locations reflect light in a way that is nearly constant over time, so they can serve as a benchmark for detecting and correcting for changes in the satellite instruments over their lifetime.

These calibration steps will form the basis of reprocessing efforts that will result in a better, more accurate cloud climatology and improved estimates of the Earth’s surface radiation budget.