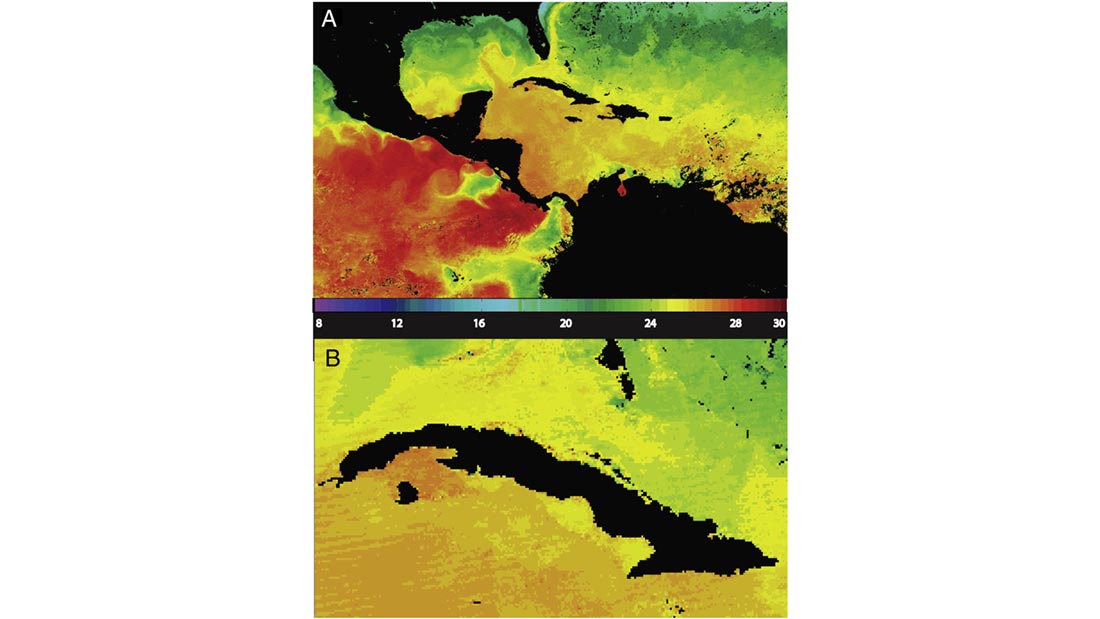 Satellite-based instruments are the best tools we have for measuring sea surface temperatures (SSTs) on a global scale, but turning infrared sensor data into accurate temperature data is not a simple task. The MODerate Resolution Imaging Spectroradiometers (MODIS) on NASA’s TERRA and AQUA satellites have now been providing high-quality SST data for more than a decade, but getting to that point required overcoming numerous challenges, both in the design and post-launch phases. A team of authors, including CICS-NC’s director Otis Brown, detail many of these challenges and report on results in “A decade of sea surface temperature from MODIS” in the August 2015 issue of Remote Sensing of Environment.

Following years of development, MODIS instruments were launched on NASA’s TERRA and AQUA satellites in 1999 and 2002, respectively. MODIS featured several innovations, including the use of multiple detectors operating in the mid-wave infrared band, where the atmosphere is more transparent and less variable compared to the long-wave infrared band. Other features included double-sided mirrors, multiple detectors for each spectral band, and larger bit-depth (12-bit rather than 10-bit) digitization.

Several of these innovations were key to the ultimate success of the project, but also introduced some unexpected challenges, such as issues with asymmetrical behavior from the two mirror sides on the TERRA instrument and problems with the digitizers that resulted in less than the hoped-for data resolution. Compromises resulting from the need to serve many stakeholders also created issues. For example, changes to the dynamic range of one channel to enable detection and measurement of forest fire temperatures necessarily reduced the sensitivity of this channel for SST measurement.

The authors describe the efforts, including three different reprocessings of the data, undertaken to deal with these challenges as well as the usual difficulties associated with turning remotely sensed satellite measurements into climate-quality observations. The result is a data set spanning more than a decade of accurate sea surface temperatures at daily, 1 km resolutions. MODIS continues to provide data while also serving as the heritage reference for the Visible Infrared Imaging Radiometer Suite (VIIRS) onboard the S-NPP platform.