These plots show that the discrepancies between the HIRS and SHEBA temperature estimates at 2m above the ground are generally largest for overcast conditions (red circles, with SHEBA cloud fractions ≥ 80%).

In an effort to improve our understanding of how the Arctic climate is changing, scientists from CICS-NC and NOAA are working to develop a new near-surface temperature dataset for the Arctic using data from the High-resolution Infrared Radiation Sounder (HIRS) instruments onboard NOAA polar-orbiting satellites.

In a paper published in the Journal of Atmospheric and Oceanic Technology, CICS-NC’s Ge Peng, Steve Stegall, and Jessica Matthews, along with NOAA colleagues Lei Shi and Christopher Fairall, report on the first step in this process—calibrating the satellite observations against ground-based measurements.

The calibration was done using data from the Surface Heat Budget of the Arctic Ocean (SHEBA) project, which provides quality controlled data from instruments deployed around an icebreaker frozen in Arctic sea ice from October 1997 through September 1998. 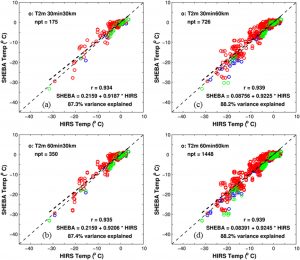 Cloud cover plays a very important role in the Arctic climate. It also has a significant impact on satellite temperature estimates, because the HIRS infrared sensors cannot “see” through clouds. Thus, under cloudy conditions, the satellites sense sense the temperature of the cloud tops rather than the surface. The authors found that HIRS tends to overestimate temperatures under clear and cloudy conditions (with cloud fractions less than 80%), but tends to underestimate temperatures under more overcast conditions (cloud fractions greater than 80%). These results highlight the importance of having accurate cloud masks to identify the clear-sky conditions that allow for accurate measurements of near-surface temperatures.