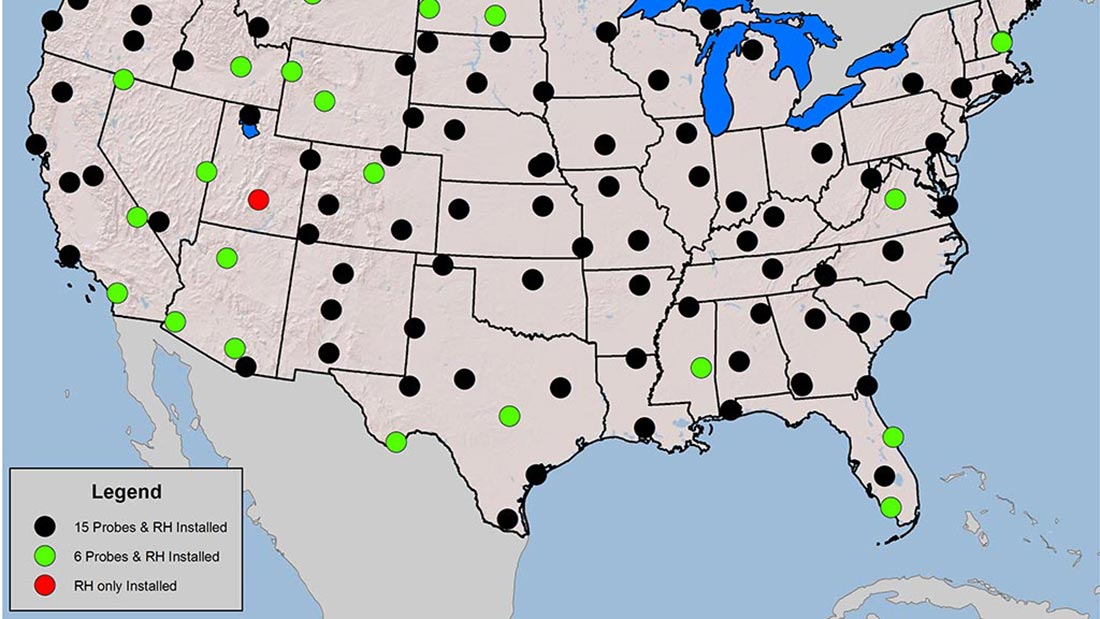 This map of the United States illustrates the distribution of USCRN. The black, green, and red dots represent stations with soil observations at all available depths, top two depths and no measurements, respectively.

The U.S. Climate Reference Network (USCRN) is a network of climate-monitoring stations maintained and operated by the National Oceanic and Atmospheric Administration (NOAA) to provide climate-science-quality measurements of air temperature and precipitation. The stations in the network were designed to be extensible to other missions, and the National Integrated Drought Information System (NIDIS) program determined that the USCRN could be augmented to provide more drought relevant observations.  To increase the network’s capability of monitoring soil processes and drought, soil observations were added to the network. In 2011, installation in the conterminous United States was completed with a triplicate configuration of soil moisture and soil temperature probes at 5 standard depths (5,10,20,50, and 100 cm). As drought and other climate extremes are predicted to increase in frequency and magnitude in the future, it is important to improve drought-monitoring capabilities across the United States. USCRN’s soil observations are one important step in improving our national need. Measurements of soil moisture and soil temperature will allow researchers to study changes and trends in soil climate observations over the next century. Thus, allowing policy-makers and decision makers from the private and public sector to have a better understanding of the changes that are occurring. In addition to directly improving US drought monitoring capabilities, USCRN will now be able to assist in validation of newly deployed satellites for soil moisture monitoring (e.g. NASA’s Soil Moisture Active-Passive “SMAP” mission).

There are numerous applications for the use of USCRN soil observations. Activities are moving forward on improved growing season estimates for farmers and horticulturists, frost depths for construction, transportation and agriculture, and, pest prevalence studies for multiple groups.

Jesse E. Bell, CICS-NC, is working with researchers at NCEI to improve the capacity of USCRN for identifying and understanding periods of recent droughts. He is also collaborating with scientists associated with the NASA’s SMAP mission to understand the spatial variability from an individual station.