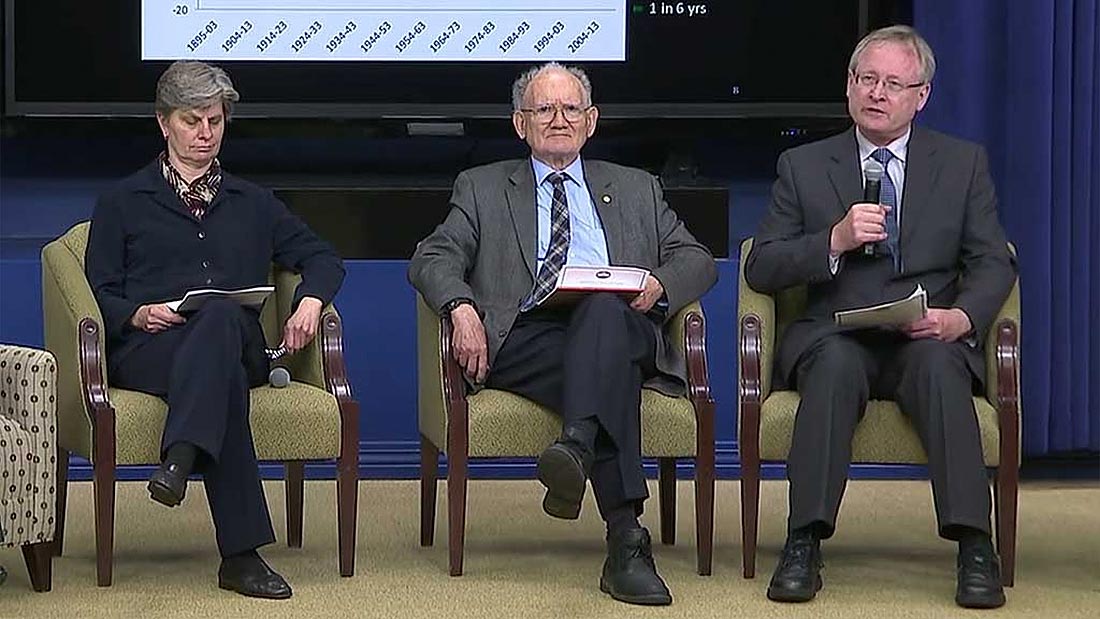 On May 10, the White House hosted a conference on resilient building codes. Climate scientist Ken Kunkel of the Cooperative Institute for Climate and Satellites–North Carolina participated in a morning panel discussion on incorporating climate change information into resilience planning. The event was streamed live on the web, and is now available for reviewing at:

Kunkel’s remarks begin about 42 minutes into the recording.

Kunkel used changes in extreme precipitation events as an example of how scientific understanding of climate change can help us develop more resilient infrastructure. He noted that extreme heavy rainfall events have been increasing for the last several decades and that “for very fundamental and unassailable scientific reasons” there is “high confidence” that these increases will continue in the future. Kunkel stated that “climate models project this, but our confidence is based on much more than that. It’s based on our fundamental understanding of the physical climate system.”

Kunkel suggested that current building codes, which are based on historical rainfall values, underestimate the projected future changes in risk and do not even reflect the changes in heavy rainfall already observed.

While acknowledging that there are some uncertainties about the magnitude of future changes, given the confidence that the direction of the changes will be towards higher risk, Kunkel asks whether that uncertainty “should paralyze us into inaction?” His answer: “Flatly, no.”

Kunkel called for an acceptance of the scientific consensus on this issue, and for relevant organizations to develop a consensus on how to incorporate this knowledge into rainfall design values. “Let’s take action where we have high confidence,” he concluded.

During the panel discussion, Kunkel pointed out that cities across the United States are actively seeking information on how to incorporate climate change considerations into infrastructure planning. The challenge, he argues, is that there is no consensus on how to go about this.

When asked about next steps, Kunkel suggested that it is urgent that we take some action immediately; for example, developing a consensus among federal agencies and organizations such as the American Society of Civil Engineers about what steps are reasonable in the short term. He also noted that some efforts are already underway to develop more systematic long-term approaches, and that it would be highly beneficial to get all the relevant organizations involved.

Kenneth Kunkel is lead scientist for assessments at the Cooperative Institute for Climate and Satellites–North Carolina and NOAA’s Assessments Technical Support Unit at the National Centers for Environmental Information in Asheville, NC. He is also a Research Professor in the Department of Marine, Earth, and Atmospheric Sciences at North Carolina State University.

Kunkel was a primary contributor of the information in the Third National Climate Assessment (NCA3) on observed changes and future projections of heavy rainfall. The heavy precipitation section of NCA3 is available online at: http://nca2014.globalchange.gov/report/our-changing-climate/heavy-downpours-increasing