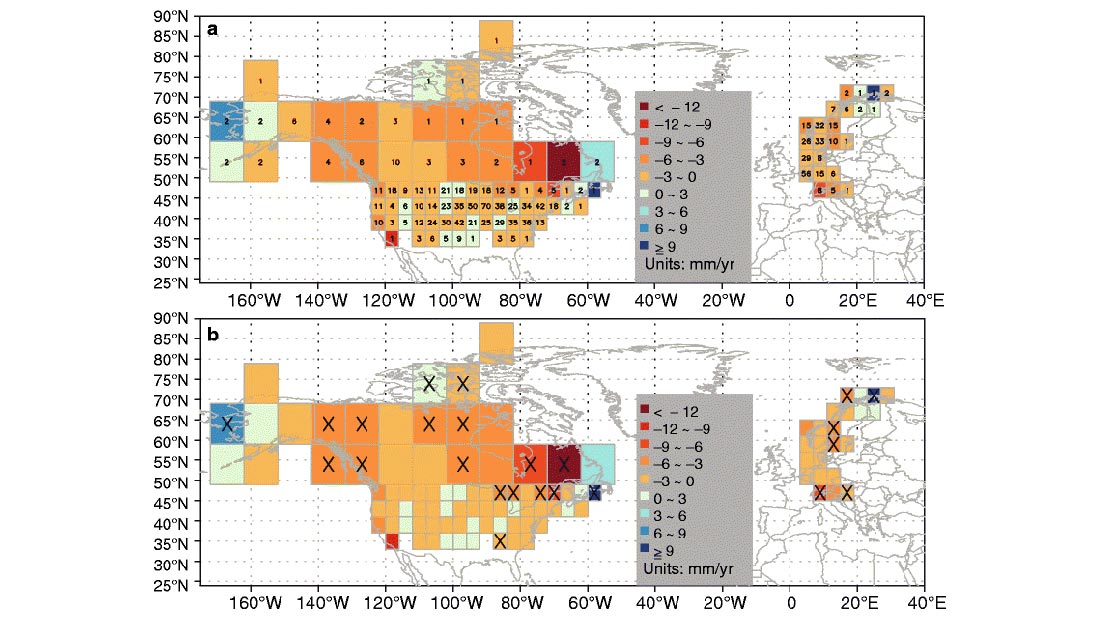 Grid box trends (%/decade) in annual maximum snow depth for cold season periods of 1960/1961–2014/2015. (a) Numbers indicate number of stations available in that grid box. (b) Boxes with “x” indicate statistically significant trends at the p > 0.05 level of significance

A new study by CICS-NCs Kenneth Kunkel, Sarah Champion, and Rebekah Frankson, along with co-authors from Rutgers University and ERT Inc., establishes the current state of knowledge about Northern Hemisphere snow trends. The paper, published in Current Climate Change Reports, concludes that, within the constraints of data availability, current Northern Hemisphere snowfall trends are generally consistent with simple hypotheses for the likely effects of global warming. In particular, seasonal maximum snow depth has been decreasing in most areas where sufficient data are available to evaluate trends.

The authors present their results in the context of two simple hypotheses about expected changes in snowfall climatology, given the observed increases in global temperatures and atmospheric water vapor driven by increasing concentrations of greenhouse gases: 1) areas where snowfall would be a regular feature of the cold season would be expected to shift towards the poles and towards higher elevations as a result of warmer temperatures and more precipitation falling as rain rather than snow; and 2) at higher-latitude and higher-elevation areas of continental interiors, where snowfall is generally limited by available moisture, increases in both total and extreme snowfall would be expected, as more moisture is available in the atmosphere.

Noting that data is quite limited for Eurasia and for higher latitudes in North America, and that the results from the previous studies reviewed are somewhat mixed, the authors conclude that there is a robust negative trend in maximum seasonal snow depth in North America and for those European stations for which sufficient data was available for analysis. Trends in snow cover extent and snow water equivalent are also generally negative for North America and Eurasia, and there is some evidence of a positive trend in the number of extreme snowfall events, with regional variability.

These results are generally consistent with the two hypotheses noted above, with the exception that snow trends are negative even in northern interior locations, where an increase in snowfall was hypothesized. The authors note that these downward trends are simulated by climate models when anthropogenic factors such as the increase in greenhouse gases are included.