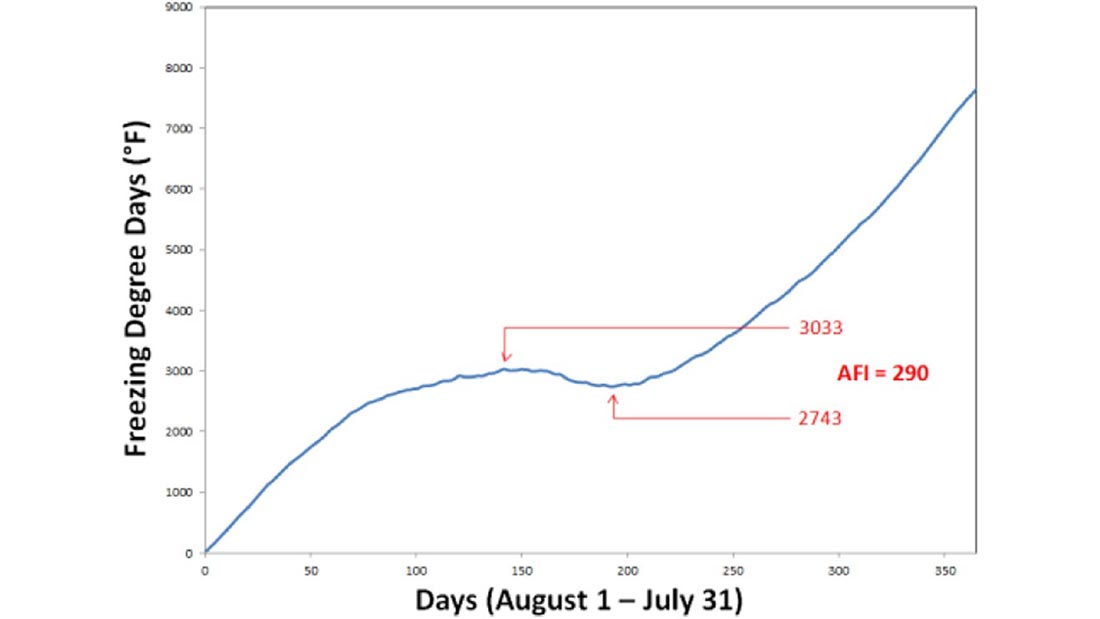 Figure shows the FDD value for each day over the 1976–1977 cold season at the Asheville, North Carolina, Regional Airport ASOS weather station. The Air-Freezing Index (AFI) for that year, calculated as the gap between the local maximum and minimum FDDs at the onset and end of the cold season, was 290.

In many areas of the country, proper building design and construction depend on accurate expectations of how deeply the ground will freeze in the winter. Soil frost depth also has important implications for hydrology, agriculture, and even burials. Because frost depth is driven by both the intensity and length of below-freezing weather, the observed warming over the last several decades is likely altering patterns of soil freezing.

In a new paper in the Journal of Applied Meteorology and Climatology titled Calculation and Evaluation of an Air-Freezing Index for the 1981–2010 Climate Normals Period in the Coterminous United States, a team of authors based at NOAA’s National Centers for Environmental Information (NCEI), including Rocky Bilotta of ERT Inc., Jesse Bell of the Cooperative Institute for Climate and Satellites–North Carolina, Ethan Shepherd of STG Inc., and Anthony Arguez of NOAA NCEI, present a new version of NOAA’s air-freezing index (AFI) that can be used to estimate maximum soil frost depth. They find significant reductions in the AFI for 1981-2010 compared to 1951-1980, consistent with the trends in climate change observed over that time period.

The AFI for a given year is computed as a running sum of FDD over that year, starting from August 1 and running through July 31 of the next year—the period centered around a single cold season. For most areas of the country, the AFI steadily increases during the first few months of this period, as daily temperature averages tend to be above freezing and the corresponding positive FDD values increase the value of the running AFI sum.

With the onset of the cold season, days below freezing produce negative FDD values which lower the value of the running AFI sum. The AFI then begins to increase again as warm weather returns and FDDs become positive again.